THE BIRD - A STORY ABOUT PEACE AND VIOLENCE 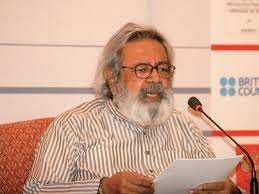 Amar Jalil is a renowned Pakistani writer and columnist . He is a prolific writer who writes in English, Urdu and Sindhi.

On the face of it, "The Bird", a story translated from Sindhi by Mohan H. Keswani, seems like a simple story which presents conflicting ideas on peace and violence spoken through the narrator and his mother. The narrator, a young man, who had just landed a secure job, likes to enjoy the simple pleasures of life.

One night, he is roused from his sleep by his eighty-year -old mother who is deeply disturbed by the presence of a "dangerous ' bird perched on a tree outside their house. while the mother prods the narrator  to kill the bird, he refuses to indulge in such an inhuman act. The constant prodding of the mother echoes throughout the story. The narrator's claim that one point, when his mother was instigating him to kill the bird, he could not even recognise her anymore, is very remarkable as it shows how violence dehumanises people. To the utter surprise of the readers, the old woman takes matters into her hands and approaches the bird with  a double barrelled gun. The timely intervention of the narrator helps the bird escape.

The story also symbolically explores the troubled ethos of the modern world, especially the author's own country that was  amidst bloodshed, violence and  a diverse  ideology and continues to exist in  a troubled state. The mother, as the unlikely instigator of the cruel act, can be symbolic of the large scale violence and the rise of extremism in the region. The bird stands for peace whose spirit is  upheld by the son. The mother's reference to history as something that has relevance in the past and future, can also reflect the wounded psyche of the people who suffered atrocities during the time of partition. The mother represents the past and espouses violence to seek revenge and does not believe that peace can yield any solution. The son, on the other hand, represents the contemporary times as a youth who would like to move on and live life peacefully.