A FAMOUS TEMPLE WHERE BRAHMA AND VALMIKI WORSHIPPED LORD VISHNU 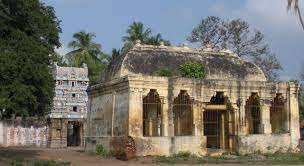 The presiding deity is vadivazagiya Nambi in a  reclining posture and the Goddess is Azagiyavalli. The sacred water is Mandookapushkarini and the Sanctum sanctorum is Taraka vimanam. The ustavar is called Sundararajan.

Legend has it that Brahma and valmiki worshipped Lord Vishnu at this Kshetram. There is also another story that Mandooks muni in his state of intense penance in underwater, failed to pay respects to sage Durvasa, who cursed Mandook muni to take the form of  a toad. Upon worshipping Lord vishnu at this kshetram Manduka Muni was relieved of his curse and hence the temple tank is called Manduka Pushkarini.

The temple complex covers an area of about one acre and has a Rajagopuram built by Chola Kings. There are inscriptions that the chola chief used to worship at this temple by placing his sword in front of the sanctum prior to his venture out in battles.