THE ROOM ON THE ROOF BY RUSKIN BOND 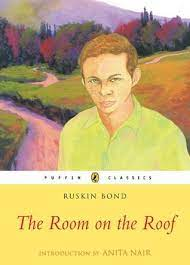 THE ROOM ON THE ROOF by RUSKIN BOND captures the life of an orphan who is obsessed staying with his guardian. It presents before the readers’ the feelings of a teenage boy and his wish to explore the new way of life which is different from the guardian’s.

The book is in a simple style of writing which makes it an easy read for the children too. The book is the winner of THE JOHN LLEWELLYN RHYS MEMORIAL PRIZE. The book received tremendous appreciations and it stands till to date as the best reader for any time. In 1953, at the age of 19, Ruskin bond sent the manuscript to publisher Andre Deutsch. It took several years of correspondence between him and his editor, and many changes to the manuscript, for the book to see the light of the day.

“A CLASSIC STORY OF ADOLESCENCE AND COMING OF AGE THAT HAS MESMERISIED READERS FOR OVER FIFTY YEARS.’’

Ruskin Bond finely presents the Indian life style in the hills of Dehra. Chaat- stalls, water tanks, maidan, bazaar and many other features of the town are brought to life.  The book entirely picturises the lively discussion held among the group of teenage friends.

THE ROOM ON THE ROOF is a fantastic attempt by the author where he skilfully describes the natural beauty of the hilly region of India. The book is set in Dehra Dun, a valley town in north India where the author spent a good part of his childhood. Situated in the Doon valley, bounded by the Himalayas to the north and the Shivalik Hills to the south, Dehra was much favoured as a residential town by the British. However, it was founded earlier, in the 17th, by Guru Ram Rai, son of Guru Har Rai, the seventh Guru in Sikh history. It was a part of the hill kingdom of the Garhwal Rajas till the 19th century.

In 1814 the British took possession of it. Today,it is the capital of the state of Uttarakhand. It is popular tourist destination, and some of the places to visit nearby are Mussoorie, Dhanaulti, and Chakrata, all hill station, Haridwar and Rishikesh. It is also known for the many educational institutions that are situated nearby, including the famous Doon school and Welham Boys School and Welham Girls School.

No other writer can describe the nuances of the vibrant Doon valley other than Ruskin Bond.  His words flow in praise of this wonderful hill station.

The book also focuses on the Anglo- Indian community, which came into being during the colonial era when many Englishmen who served in India married or had relationship with Indian women. Anglo –Indians are the children of these unions. The main character “Rusty” is an Anglo –Indian boy and the issues of him belonging to a different community is handled sensitively.

I quote, “What are you my son, are you one of us? I have never, on this river, seen blue eyes and golden hair.”

Unfortunately though, the community found it hard to gain acceptance in either British or Indian society. Labelled “half- breeds” and “half-castes” and mocked at for their “chi-Chi” English, they faced rejection when they were sent to Britain for education or work. The Indians, on the other hand, looked upon them with suspicion and distrust. Caught between their yearning for a “homeland” most had not even seen and a culture they could not identify with, the Anglo-Indians chose to take the side of the British during India’s struggle for freedom.

The author’s adolescence was peppered with characters you get to meet in the book. As you might imagine, many of the incidents that happen between the friends in the book really did take place.

I Quote “The smart shops and restaurants were closed. In the bazaar, oil lamps hung outside each doorway; people were asleep on the steps and platforms of shop fronts, some huddled in blankets, others rolled tight into themselves. The road, which during the day was a busy, noisy crush of people and animals, was quiet and deserted. Only a lean dog still sniffed in the gutter. A woman sang in a room high above the street- a plaintive, tremulous song – and in the far distance a jackal cried to the moon. But the empty, lifeless street was very deceptive; if the roofs could have been removed from but a handful of buildings, it would be seen that life had not really stopped but, beautiful and ugly, persisted through the night.

The book colourfully covers the festival of colours –Holi. The drum beats, colour splashes and the coming of spring marks the Holi and it is lively explained by the friends to rusty which makes him to join the celebrations. The eagerness to know about the festival and his wish to be a part of it makes Rusty to react to the drum beats and reaches the place of the celebrations.

I quote Rusty woke to the sound of the second drum –beat, and lay in bed and listened; it was repeated, travelling over the still air and in through the bedroom window. Dhum!.. A double –beat now, one deep, one high, insistent, questioning…

The author showcases the agony of Rusty in not finding a job, a place to live and being alone. It also emphasises how he struggle with himself. With the support of friends and his determination to be independent fetches him an opportunity to lead his life in his own way.

Ruskin bond effectively puts in the role of happiness in once life and suggests that being happy is most important to enjoy the things around us.

I quote “They walked home in the evening. The evening was full of sounds. Rusty noticed the sounds because he was happy, and a happy person notices things. “

This book helped Ruskin Bond to establish himself as a writer and he went to become one of India’s most prolific and accomplished writers. He has more than three hundred short stories, novels and essays and numerous children’s books to his credit and this work “The room on the roof “was made onto a television serial.

The author always leaves the message “to cultivate the habit of reading in order to become a writer.”  He read voraciously, everything from comics to literature to erotica. He remembers being strongly influenced by Dicken’s David Copperfield and Hugh Walpole’s Fortitude. So great was his love for books that he decided even before leaving school that he would be a writer. His readings and his sheer hard work paved way to realise his dream.

Like Rusty, young Ruskin was something of a rebel. In scenes from a writer’s Life he says :  I was very much my own person- strong in my likes and dislikes, very stubborn, wanting and getting my own way, my own room, my own privacy; old fashioned enough to believe in loyalty to friends; scorning money for money’s sake; ready to discover things about myself and come to terms with a wayward, sensual nature; above all, eager to express myself in the language I’d learnt to love; ambitious enough to want to see my name in print. To love and be loved; to be free. Free to wander where I pleased; read what I liked; be friends with those who attracted me.

Ruskin bond’s love and yearning for Dehradun, his father’s death, purchase of a brand new type writer paved way to start writing the book THE ROOM ON THE ROOF.

Like the words of Kishen, I quote “One day you‘ll be great, Rusty. A writer or an actor or a prime minister or something. May be a poet! Why not a poet, Rusty?”

Ruskin Bond is a great writer and a poet inspiring thousands of people around the world. His writings put forth the reality and encourages the readers to believe in their will power and continue their journey in their desired path.

Ruskin bond has created so many characters with unique voice and they stay and support the readers in every walk of life. Though Ruskin bond is often termed as children’s writer, his writings are enjoyed and cherished by adults too. His interviews and talks in literary festivals supplement his writings and readers look forward to more books from him.

Like these his words show us the real picture rather than just describing the situation. His words are apt and touching which makes him stand out from the crowd.