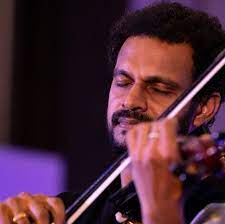 In  the blogchatter’s A2Z campaign, I will be presenting blogposts on ‘EXCEPTIONALLY TALENTED INDIAN ARTIST’ in the alphabetical order.  Today, X-   Xavier  -  Violin. First few lines about the instrument, then about the artist.

"Music is the great uniter. An incredible force. Something that people who differ on everything and anything else can have in common." - Sarah Dessen

Violin is a string instrument with hollow wooden body. The violin typically has four strings and is  played by drawing a bow  across its strings. Violins are important instruments in a wide variety of musical genres. The arched shape, the thickness of the wood, and its physical qualities govern the sound of a violin.

The violin is played either seated or standing up.  In Indian music the musician sits on the floor cross-legged with the right foot out in front of them. The scroll of the instrument rests on the foot. This position is essential to playing well due to the nature of Indian music. The hand can move all over the fingerboard and there is no set position for the left hand, so it is important for the violin to be in a steady, unmoving position.

While most violins have four strings, there are violins with additional strings. Some have as many as seven strings. Seven is generally thought to be the maximum number of strings practical on a bowed string instrument; with more than seven strings, it would be impossible to play any particular inner string individually with the bow. Violins with seven strings are very rare.

Xavier is a violinist and part of the band which presented an internet sensation with their unique instrumental renditioning of the ‘Padakali’.Initially the band played the  music at an event in Fort Kochi. It received a good response and then it was released on the internet.  The band comprises Robin Thomas, pianist,  Carol George, violinist who are founder members, Harald Antony, viola, Maria Grigoreva who is from Russia plays the cello, Binoy Joseph, percussion while Benhar Thomas, plays  drums. Joby Jose and Cheenu  apart from Xavier who were responsible for forming the band.

Xavier played violin with many other famous instrumentalist from around the world. His dedication towards the art fetched him a chance to join the band - Orfeo. It is perhaps the only quintet band in the country, has many plans for the band.  With all the five musicians virtuosos of their instruments Orfeo is set for a long, symphonic journey.

The new-look Orfeo has, apart from Robin and Carol, three talented musicians – Francis Xavier (violin), Herald Antony (viola) and Joshua Samuel (cello). And joining them to put the act together, acting as the arranger of the band is Rex Isaac, the brilliant violinist, teacher, and conductor. The professionalism of the band is evident in the unpretentious and superlative playing of the five amazing musicians. They are at ease, perfecting the art of melding different worlds.