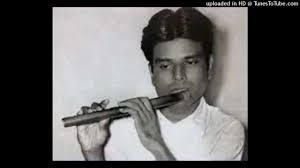 In the blogchatter’s A2Z campaign, I will be presenting blogposts on ‘EXCEPTIONALLY TALENTED INDIAN ARTIST’ in the alphabetical order.  Today, M – Malli – Flute.  First few lines about the instrument - then about the artist.

"Once you have heard the Indian bamboo flute then everything else is just ordinary ! " -Osho.
Flute is a wind instrument finding reference from the Lord Krishna. There are many varieties of flute and it is a widely recognised, learnt and played instrument in India. A flute is an open tube which is blown into and it produces  sound when a stream of air directed across a hole in the instrument creates a vibration of air at the hole. By varying the air pressure, a flutist can also change the pitch by causing the air in the flute to resonate at a harmonic rather than the  fundamental frequency without opening or closing any of the holes.
Today, a musician who plays any instrument in the flute family can be called a flautist or simply a flute player. Flutist dates back to at least 1603, the earliest quotation cited by the Oxford English Dictionary. Flautist was used in 1860 by  Nathaniel Hawthorne in THE MARBLE FAUN, after being adopted during the 18th century from Italy like many musical terms in England since the Italian renaissance.

Malli is  a flautist par excellence and the founder of the popular style of flute playing which is followed in Carnatic circle these days . His style of continuous flute playing provided gamakas, and an ability to better imitate the human voice. His first concert was in 1933 at the Thyagaraja festival in Mylapore, at the age of seven.  Malli is  a child -prodigy and his performances brought him critical acclaim.

Malli's  style of playing remains to this day unparalleled and his techniques came into greater prominence under N. Ramani and it is being carried forward by many of his students. Malli revolutionised the style of flute playing in the carnatic music and it is till to date.

(I'm participating in #BlogchatterA2Z and hyperlink to https://www.theblogchatter.co)
at April 15, 2022